The problem of resource saving is becoming ever more urgent now. One of the directions of its solving is improvement of fatigue life of parts reconditioned by automatic arc surfacing, in particular, heavily loaded crane wheels of metallurgical shops. A considerable improvement of the residual life of reconditioned parts is achieved using surfacing consumables. They enable producing in the deposited metal the structure of strongly hardening metastable austenite, which transforms into martensite under the influence of deformation at loading in operation, which is classified as the effect of self-hardening at loading [1].
The first surfacing consumables ensuring formation of metastable austenite in the deposited metal were developed by M.I. Razikov with a team of associates at the start of the 1960s [2] based on cavitation-resistant 30Kh10G10 steel developed by I.N. Bogachev and R.I. Mints [3]. These surfacing consumables were applied mainly to improve the fatigue life of parts of hydraulic units, and later for surfacing various rapidly wearing parts operating under the conditions of dry friction, in particular, crane wheels.
A feature of surfacing by such materials, is the fact that failure to satisfy a number of conditions may result in embrittlement of the deposited layer because of formation of austenitic-martensitic structure, characterized by a high hardness. To prevent it, surfacing should be performed at relatively low values of current, arc voltage, but at an increased speed, formation of narrow beads, their intermittent nature, thus making the technology more complicated. In addition, deposited metal has poor cuttability [4] as a result of an intensive formation of martensite under the tool impact (deformation martensite).
Under the conditions of friction wear resistance of high-alloyed deposited metal of Fe-Cr-Mn system is largely determined by hardening ability of austenite proper, which depends on its carbon content and intensity of formation of deformation martensite [5]. It is important to note that selection of rational composition of surfacing consumable and post-surfacing heat treatment mode allows optimization of development of martensite transformation at loading, as in this case it is possible to achieve the highest level of wear resistance of the deposited parts.
New flux-cored wire WELTEC_N285 (Fe-Cr-Mn) was developed, which is largely devoid of the above drawbacks. Proportion of carbon, chromium and manganese is selected so as to achieve immediately after surfacing an increased stability of deposited metal austenite relative to γ→α’’-transformation compared to the known surfacing consumables of this type. For this reason technology of surfacing is greatly simplified and cuttability is improved, thus promoting a wider application of the developed flux-cored wire. The required intensity of running of deformation martensite transformation in service is achieved as a result of heat treatment, which is performed after surfacing to relieve inner stresses.

Optimum mode of surfacing by 3.6 mm wire is as follows: I = 350-400 A; Ua = 35-40 V; νstyle=s = 40- 45 m/h. AN-26 and REKORD SK EN-760 fluxes were used. Here a good formation of the deposited metal layers and their joining with each other and with the base metal are achieved. Lacks-of-penetration, slag inclusions and cracks are absent (Figure 1). Slag crust separability is good. At surfacing with the developed flux-cored wire the deposited metal layers have an austenitic structure with dispersed carbides located inside the grains (Figure 2). No microcracks form in the deposited metal. A structure of austenite with troostite net is found near the line of fusion with the base metal (65G steel). Base metal has a troostite structure near the fusion line.

Hardness measurement across the section showed that it is equal to HB 217-220 near the deposited metal surface, and to HB 230-240 in the middle part, and at the transition zone it increases to HB 280-300, which is the result of carbon, chromium and manganese redistribution in the zone of fusion with the base metal.

As follows from the testing results, wear resistance of the metal deposited with the developed flux-cored wire at sliding friction by shoe-roller schematic and abrasive impact practically does not differ from that value at deposition with Np-30Kh10G10T wire (GOST 10543-98) and is much higher than that value when using wires FCW-Sw-18Cr1Mn1Mo (GOST 26101-84), Sv-12Kh13 and Sv-06Kh18N9T (GOST 224-70) (Table). Application of the developed flux-cored wire of Fe-Cr-Mn system provides a structure of metastable austenite, strongly hardening at cold working. The degree of its hardening is the same as with Np- 30Kh10G10T wire, but maximum hardness is achieved during 1.5-2 times longer time, which is due to a lower intensity of deformation martensite transformation at application of the new wire. This results in longer time of the stress relaxation process alongside hardening, thus impeding crack initiation and propagation [6]. After annealing at 600 °C applied after surfacing to relieve inner stresses, a multitude of dispersed carbides is found in austenite, which also promote an improvement of wear resistance. According to the data of X-ray analysis, deformation martensite content on the worn surface after annealing of the deposited metal is 1.5-2 times higher than without it (30-35 wt.%), which is indicative of its partial destabilization. Long-term industrial testing of crane wheels surfaced by the developed flux-cored wire, providing the effect of self-hardening in operation, confirmed the results of laboratory investigations and demonstrated an increase of fatigue life of these parts more than 3 times compared to wheels reconditioned by the commercial FCW-Sw-18Cr1Mn1Mo wire. The achieved result was similar to that obtained with Np-30Kh10G10T wire. However, the new material also offers indubitable technological advantages in surfacing. Measurement of hardness of the working surface of wheels, surfaced by the new flux-cored wire, showed that it increased from HB 217-220 to 450-470. This is indicative of realization of the self-hardening effect in the deposited metal during wheel operation, which ensures an improvement of their fatigue life. No increased wear of the rails is found at increase of crane wheel wear resistance. 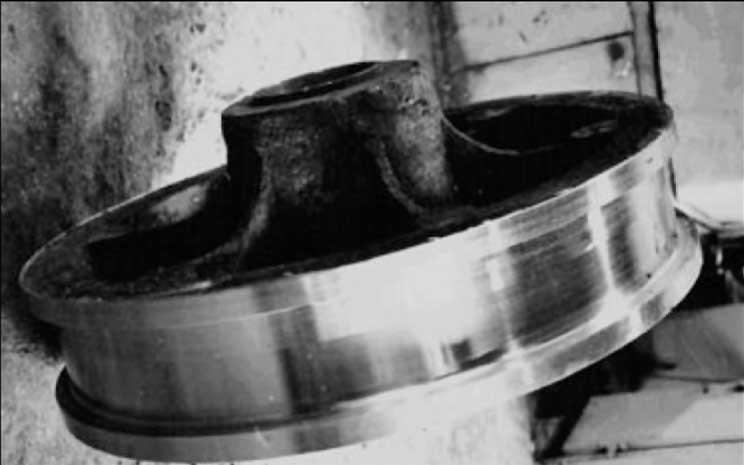 Machining of crane wheels reconditioned by the new flux-cored wire using tools fitted with hard alloys does not involve any technical difficulties. Figure 3 shows the appearance of a surfaced and machined wheel. It should be noted that the metal deposited with the new wire is more difficult to machine than when FCW-Sw-18Cr1Mn1Mo wire is used. By the degree of machinability it is close to the metal deposited with Sv-06Kh18N9T wire.
Thus, the developed flux-cored wire, providing the structure of metastable austenite in the deposited metal strengthened by dispersed carbides, features a good adaptability to fabrication in surfacing. Use of the new flux-cored wire owing to the effect of self-hardening in service allows an essential increase of fatigue life of the reconditioned parts.
The developed surfacing consumable can have a wide range of applications. It can be used not only for reconditioning crane wheels, but also wheels of railway rolling stock of enterprises, quarry wagons, various rollers, trunnions of steel-pouring ladles, rapidly wearing parts, exposed to low-aggressive media, for instance plungers in hydraulic presses, stop valves, and many other products, currently reconditioned by low-carbon surfacing consumable of different degrees of alloying. Cost effectiveness in this case is determined by costs (material, energy, labour, equipment downtime), which are much higher than the cost of the applied wire.