Electric arc surfacing, using flux-cored wires, occupies strong positions in renovating parts of machines and mechanisms in various branches of industry. A flux-cored wire is chosen taking into account operation conditions of a part to be renovated, its design peculiarities, type of protection, and available equipment. Rolls of machines for continuous casting of ingots (MCCI). About 80 % of the whole steel produced in developed countries is treated using energy-conservation technology of continuous steel casting, which has a number of other advantages as well. Efficiency of using MCCI is determined to a great degree by durability of its rolls, which operate under conditions of long cyclic and thermal-mechanical loads in corrosive atmosphere. Rollers of supporting and unbending assemblies operate under extreme temperature conditions: maximum temperature of roller surface may achieve 670-750 °C, and they are subjected to ferro-static bulging and unbending actions of an ingot. In straight sections rollers are mainly subjected to abrasive wear. Destruction of their working surface is manifested by the surface layer wear and formation of fair cracks. The most efficient manufacturing and renovation surfacing of rollers is achieved when flux-cored wires are used as a surfacing material. Surfacing efficiency is determined by the cost of a flux-cored wire, productivity of the process, thickness of a deposited layer, power consumption at all technological stages, cost of installation works, and shut-down period of the equipment. For renovation surfacing of MCCI rollers, solid and flux-cored wires 12Kh13 and 20Kh17 in combination with fluxes AN-20S and AN-26P are traditionally used in national metallurgy. This ensures production of a chromous deposited metal with martensite-ferrite structure (Figure 1), 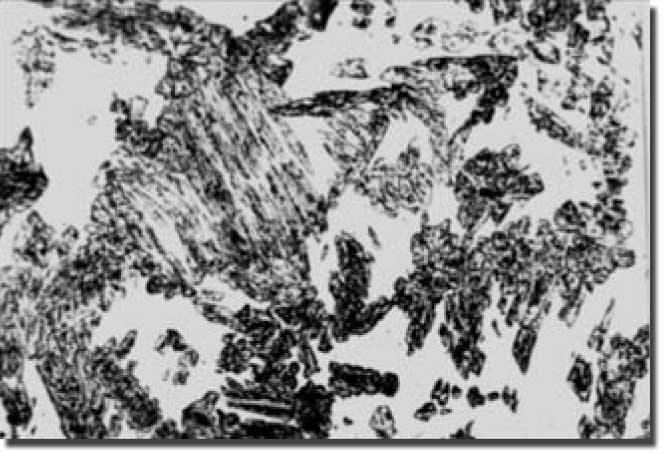 for which formation of big (more than 15 %) areas of δ-ferrite is characteristic, which is the reason of increased wear and fair crack formation. In addition, the surfacing process is accompanied by difficult separation of the slag crust, which is the reason of origination of the defects in the form of elongated slag impurities. The service capacity of rollers, renovated according to this technology, is 300-400 ths. t of ingots, which does not meet state-of-the-art requirements.
At the enterprise of TM.WELTEС Ltd. flux-cored wires WELTEC-H470 and WELTEC-H470S (TUU 19369185.018-97) in combination with fluxes An-20 and AN-26 are used for this purpose. Complex alloying of chromous metal with Ni, Mo, V, Nb and rare-earth metals is used for improving structure of the deposited metal. Optimum content and ratio of alloying elements, technological parameters, and surfacing techniques, which allow stable producing deposited metal with martensite structure (Figure 2) and insignificant volume share (3.5-5.0 %) of δ-ferrite having hardness HRCe 40-44, were determined and implemented. This ensures high resistance of the deposited metal to wear and fairing. 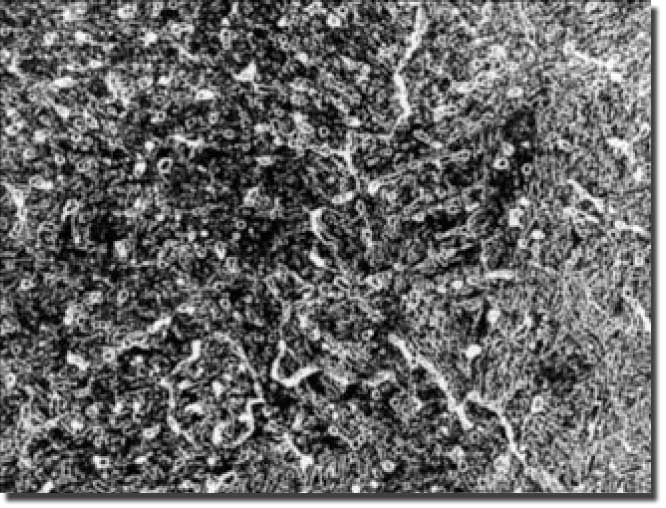 Application of proposed technology ensures spontaneous separation of slag crust and absence of pores and cracks in the deposited metal. Comparative tests of flux-cored wires WELTEC-H470 and WELTEC-H470S showed that their working parameters are similar to those of the wires produced by leading foreign companies - OK 15.73 (ESAB), 4142MM-SLC, 414MM-S (WELDCLAD). Wire WELTEC-H470 was successfully used at Novo-Kramatorsk Machine-Building Works for fulfillment of export orders. Within the last eight years at the Iliich Mariupol Metallurgical Works the wire of this grade was also used for renovation of MCCI rollers. Service capacity of surfaced rollers is minimum 1.5 mln t of ingots. At present wires of new modification are produced at the enterprise TM.WELTEС Ltd., which increase service capacity of the rollers up to 2.5-3.0 mln t.
Rollers are the main technological tools in the rolling process. Productivity of rolling mills, technical-economic performance of rolling workshops, quality of ready rolled stock, and production cost mainly depend upon reliability and wear resistance of working surface of rollers, and their term of service between repairs. In the process of operation surface of rollers is subjected to cyclic, mechanical, and thermal action, to their working surface sticks metal, the surfaces are non-uniformly worn, and fair cracks form on them. Renovation surfacing with application of solid or flux-cored wires is used for maintaining necessary stock of the rollers. For surfacing of hot rolling rollers surfacing materials Np-30KhGSA, FCW-Sw-35W9Cr3SiV, Wet-FCW-Sw-25Cr5VMoSi, and FCW-Sw-30Cr4W2Mo2VSi in combination with fluxes AN-348, AN-60, AN-20, and AN-26 are traditionally used.
Companies TM.WELTEС and REMMASh jointly with metallurgical works «Krivorozhstal», «Zaporozhstal», Dzerzhinsk Metallurgical Works, carried out complex of works directed at improvement of surfacing materials, technology, and equipment for surfacing rollers. Proceeding from the assortment of items produced by the metallurgical works, which participated in the work, main attention was paid to surfacing materials and technology of surfacing hot rolling rollers of billet, section, and partly sheet mills. Analysis of literature data, in which serviceability of surfaced rollers is discussed, showed that possibilities of the alloying systems C-Si-Mn-Cr-Mo-V and C-Si-Mn-Cr-W-V are not completely implemented. On the basis of standard flux-cored wires of the grades FCW-Sw-35W9Cr3SiV and FCW-Sw-25Cr5VMoSi systems for alloying flux-cored wires of new grades were improved taking into account operation conditions of rollers. 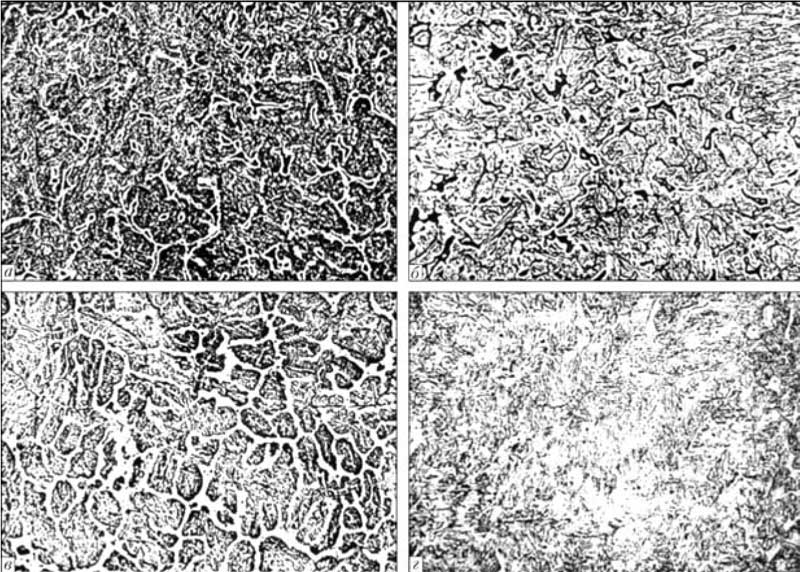 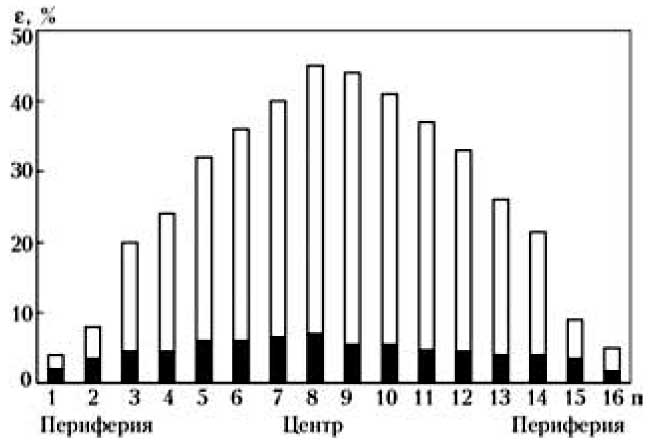 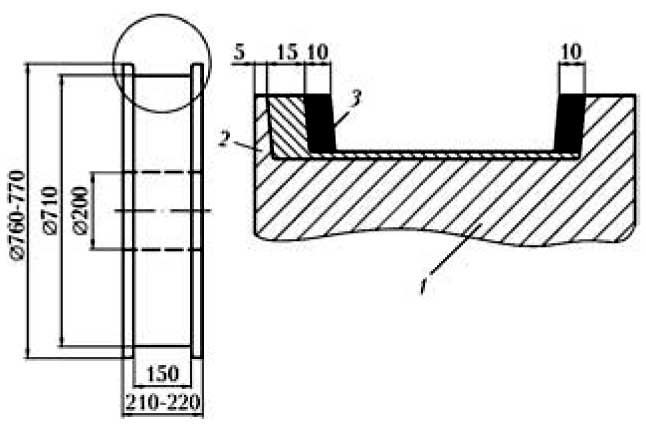 This technology allowed increasing service life of wheels 2 times, while material consumption increased only by 70 %, and labor input into machining increased by 35 %.
Parts of mining machines and crushing-grinding equipment. At present CJSC «Krivorozhie Mining Equipment Plant» is an advanced enterprise in Ukraine, which produces and repairs mining equipment. High share of welding and renovation operations are performed at this plant using arc welding and surfacing. The plant uses wide nomenclature of welding and surfacing consumables due to the need of welding low-carbon low-alloy, low-alloy high-strength, and high-manganous and heat-resistant steels; welding of dissimilar steels, cast steels, and correction of casting defects. In majority of cases these are large-size items, that’s why special requirements are established to welding materials, technology, and technique of welding and surfacing. Because of this reason improvement of quality of the works and reduction of material, power, and labor consumption are actual tasks. Flux-cored wires completely meet these requirements. Within the last five years the Krivorozhie Mining Equipment Plant jointly with TM.WELTEC increases volumes of arc welding and surfacing operations using flux-cored wires. As a result a range of flux-cored wires of various designations were developed and introduced. The share of flux-cored wires in general volume of the consumables used for welding and surfacing increased from 15 to 85 %. Efficiency of welding and surfacing increased in comparison with coated electrodes due to higher productivity and quality of work, and reduction of volume of works connected with a repeated quality control. Traditional mistrust to flux-cored wires in regard to their application for producing quality welded joints and reinforcement coatings significantly reduced. Below several examples of flux-cored wire application at the enterprise of TM.WELTEC, Ltd. are given.
Bowl of cone crusher KKD-1500 was welded. The bowl of 50 t mass, manufactured from steel 35L, was made of two parts -- lower and upper ones, which were welded together. Horizontal field joint of 2980 mm diameter was produced using double-sided bowl-like beveling, the metal thickness being 180 mm. CO2 welding (at DCRP) was performed using flux-cored wire FCWw-TMW29 of 1.6 mm diameter (Figure 6). 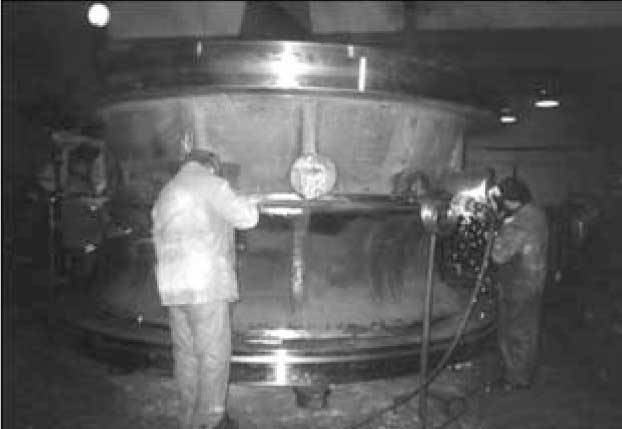 Welding of parts and units of agglomeration and enrichment equipment and mining machinery (including units of excavators from steel grades St3ps, 09G2S), and welding up of cast parts from steel grades 20L and 35L, are performed at mentioned enterprise using gas-shielded flux-cored wires FCWw-TMW5, FCW-AS8, FCWw-TMW8, FCWw-TMW29, and units, produced from low-alloy high-strength steels 12Kh2NMSA and 12Kh2NVSA, are welded using wire PP-AN57. The most efficient for welding-up casting defects in steels 20L and 35L is flux-cored wire FCWw-TMW5. Due to low content of slag (4-5 %) there is no need in its removal in the process of welding-up deep grooves. High wire utilization factor K = 1.08 and resistance against formation of pores and cracks prove advantage of this wire over other welding consumables.
For welding parts of heat-resistant Cr-Mo steels 15KhM, 12KhM, 20KhML and 35KhML, and welding-up casting defects gas-shielded flux-cored wire Wet-FCWw-TMW14 of 1.6-2.0 mm diameter with the core of carbonate-fluorite type is used.
Welding-up of high-manganous steel 110G13L casting defects is performed by self-shielded fluxcored wire WELTEC-H220U of 2 mm diameter. Surfacing of reinforcement layers on locking bars of bottoms, cutting edges and bodies of excavator buckets, edges of inlet devices of ball mills, bodies of sludge pumps, pumps of suction-tube dredgers, road grader and bulldozer blades is performed using selfshielded flux-cored wires WELTEC-H580, WELTEC-H600, WELTEC-H605, and WELTEC-H620 of 2--3 mm diameter (instead of electrodes T-590 and T-620) and flux-cored wires FCW-Sw-200Cr15Si1MnBTi, FCW-Sw-80Cr20B3Ti, Linocore 60-O, Linocore 60-S, Linocore 65-0, DÜR 600-FD, DÜR 650, DÜR 650MP, OK Tubrodur 14.70, and OK Tubrodur 15.52.
For renovation surfacing of hydraulic press plungers and protection bushings of suction dredges, designed for pumping slurry, flux-cored wire WELTEC-H410of 2.4--3.6 mm diameter is used in combination with fluxes AN-20 and AN-26, and for open-arc surfacing wire WELTEC-H420 of 1.4--3.0 mm diameter is used. For surfacing parts of mining hydraulic equipment flux-cored wire WELTEC-H425 of 2 mm diameter is used in combination with fluxes AN-20 and AN-26, surfacing process being characterized by high stability, good formation of metal, and spontaneous separation of slag crust. Deposited metal, produced according to this process, has high corrosion resistance and is fit for operation in mine faces.